The History of Brittas 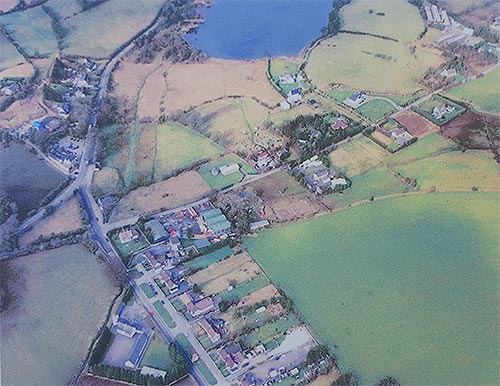 'Briotás' is a direct borrowing of the old French area of Bretesche and in modern English is usually written as 'brattice' signifying 'boarding' or 'planking' and referring to wooden defences. Usually associated with a castle, either a stone castle where such wooden structures may have been used as ancillary defences, or, more appositely, a motte or castle -mound of the Anglo-Norman period, where wooden palisades and towers would have constituted the major defense works. The term occurs in many Irish place names usually in the form of 'Brittas' as in Brittas, Co Dublin.

In the year 999 - Brian Ború: It was in the Slade of Saggart known in ancient times as Glen Mama, that Brian Ború defeated an allied force of Norse men of Dublin and Leinster in a battle in 999. This was the first time that the Norse were substantially defeated on European soil. It also led to the ultimate defeat in Clontarf fifteen years later in 1014. The Clontarf site has vanished into the tsunami of Dublin concrete but the Slade remains virtually unchanged.

1534 - 1597 - Fiach Mc Hugh O'Byrne: It was through the Slade of Saggart that Fiach Mac Hugh O'Byrne (1534-1597) stormed with his troops in a reprisal attack on the pale destroying its outposts of Saggart, Tallaght, and Crumlin. Fiach, one of the forgotten chiefs of the Nine years' war 1592-1601, and like the Native American Indian, was just protecting his homeland, family and his clan. The strategy developed by the Elizabethan forces to subjugate Fiach was the same strategy later used in the colonisation of the Redman in the USA.

Charles Bianconi revolutionised public transport in Ireland with the use of horses and carriages. He established a network of routes, which eventually covered most of the country from Belfast to Cork. They were called Bians, in their heyday there were 100 cars, 140 stations, 100 drivers, 1,300 horses providing cheap and regular transport between the main towns and cities. Brownsbarn on the Naas Dual carriageway was a substantial supply post for fodder, feed and new teams of horses for the journeys. The route along Boherboy, Soldier's road, through the Slade, on to Brittas and then Blessington, was the Bians principal southward route.

Within the Republican tradition, many old comrades believed that the civil war was lost or won at the top right hand side of the Slade at Crooksling. Ermie O'Malley was leading republican reinforcements on route to Dublin after the fall of the Four Courts. They were met by a dispatch rider at Crooksling countermanding their orders and ordering them back to Blessington. They did so reluctantly. Many old IRA members believed the failure to take Dublin ultimately led to the loss of the civil war. 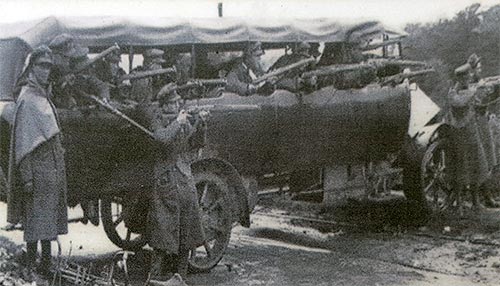 (National Army soldiers at Crooksling Cross, South County Dublin, 5th July 1922. After the fighting in Dublin had ended, the battle moved to South County Dublin, where the Republicans had retreated. They were originally meant to have marched on Dublin to relieve the garrison in 'The Block', but the plan was never put into action.)

The Bog Larkin (ancient name for the Brittas ponds site). Geraldine Stout, Board of Works Archaeologist, maintains the Bog Larkin, the ancient name of the site of the ponds was a lake in earlier times, and that the small island is in fact the only Crannog in County Dublin.

Highwaymen and the road to Brittas. Before the Embankment road was built, the coaches bound for Baltinglass and Wexford left the present Blessington Road by Jobstown cottages and went up Mount Seskin and then joined the road at Brittas.

For a time, this route was abandoned in favour of an easier gradient to the right of the same Jobstown cottages, going through the Slade. The Downshire bridge, now listed for preservation was built to take the road across the Camac river.

Where the Slade road joins the Blessington Road on the site of Mrs Redmond's cottage, was the changing stage for tired horses, and presumably some sort of Inn to accommodate the travellers.

However, the activities of the highwaymen forced the coaches to abandon this easier route, and return to the tougher climb of Mount Seskin. 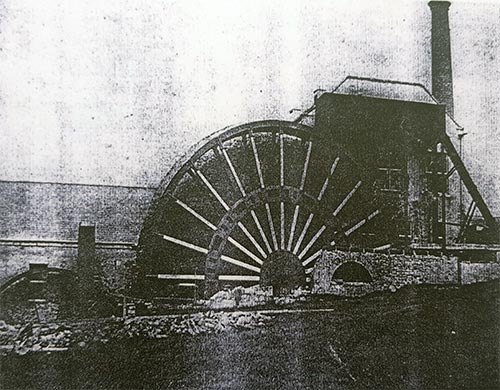 John McDonnell was succeeded by his son John McDonnell Jnr and between 1836 -1848 he commenced a root and branch expansion of their mill business at Saggart. Up to this time the river Dodder and Owendoher river in Ballyboden had been the site of most Irish mills in the history of paper milling in the Dublin area. These rivers enjoyed a good dependable flow of water to supply their mills. Saggart's development was somewhat hampered by its restricted water source. So John McDonnell and some of the mill owners situated on what is now known as the Camac began a daring plan to increase their water pressure and ensure a dependable through put of water for their mills. Their efforts ultimately became known as the river Camac.

The Camac is in fact an artificial tributary of the Liffey. It rises in the mountains of Seechan above Bohernabreena, not far from Saggart. The small stream flows through Ballynascomey by Penny Bog to Aughfarnell where it meets another stream from Butler Mountain. The united stream then flows on as the Brittas Lisheen River and part of their course forms the boundary lines between Wicklow and Kildare. In 1836, John McDonnell and the mill owners had a dam erected across the river at Aughfarrell turning a portion of its waters into an artificial channel. This diverted channel now flowing through Brittas and the commons of Saggart became known as the Slade Mor. From this point on, the river took the names of the different town lands through which is passed. The name Camac or Camnock does not seem to have been generally known until 1836. In that year a lawsuit was brought by mill owners on the Camac against a Mr Bennett of Aughafarrell who attempted to prevent the diversion of the water into the artificial Camac unless compensation was forth coming. On the law notices served on the parties to the suit, the name Camac appears for the first time. It is believed that the stream got its name from the fact that the men who first dug the artificial channel were paid their wages in Cammack halfpence.

In 1847, during the height of the Famine, John McDonnell purchased an area of 47 acres of land from the Dowling family at Brittas. The Dowling's owned the Brittas Inn and sold this track of land to Mc Donnell. This land lies almost opposite the present day Blue Gardenia Pub and through which the diverted river course ran. The object of this was to keep a good reserve of water for the dry season. One of the banks was deep and this required being lined at either end with great sloping embankments of about 30 feet in height. These banks were lined with large granite slabs from Balknockan quarry to prevent erosion and flooding in the area and contain and maintain the boundary of the new Brittas ponds. Then by a series sluice gates, some still in existence, he controlled the flow of clear mountain water for use at his Swiftbrook mill in Saggart.

On the site of the mill in Saggart He constructed an entirely new mill that became known as the Upper Mill. He erected the water wheel to power the mill by steam and water. The Mill Wheel was built by the Dublin firm of J & R Mallett who had an iron foundry at Ryders Row near Pamell Street. Robert Mallett was a famous Irish engineer of his generation. Some of his engineering works still survive to this day.

The wheel had a 53 foot 1 inch fall. It turned 18 tons of water per minute in its 26 inch buckets, with one and a half revolutions per minute at normal working speed. The wheel gave 50 to 55 horse power to the machines and shared with a steam engine the powering of the upper mill. Regarded as a marvel in its day, it became a tourist attraction with people coming out on the Blessington steam tram to view it as it made a great contrast of modern engineering in what was then described as 'the picturesque and mountainous locality' of Saggart.

Though the wheel was replaced by electric power by the Drury's, who took over the Mill in 1880, water remained the principal ingredient in the manufacture of quality paper right up to the closure of the mill in 1971. The washing process alone consuming 25,000 gallons of filtered water in every hour.

The Dublin to Blessington Tram Line 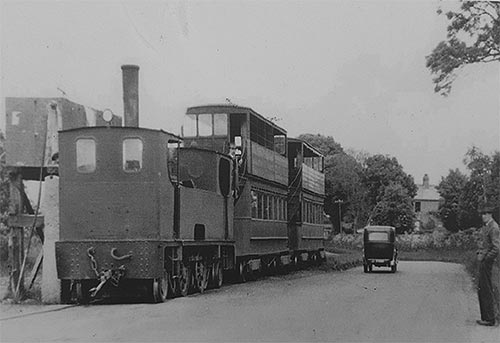 On Wednesday, 1st August 1888, the Dublin & Blessington Steam Tramway (the DBST) opened for business. The first train was the 8:35am mail train leaving Terenure for Blessington. The tramway used the Irish standard gauge of 5 foot 3 inches (1,600 mm). The tramway connected with the horse-drawn trams from the city.

An extension of the line to Poulaphouca was opened in 1895, and the Blessington and Poulaphouca Steam Tramway was incorporated, with through-running from Terenure from 1896 until the extension was closed in 1927.

In 1911, a major proposal was put forward for the electrification of the line as far as Crooksling, but the intervention of World War I meant that this was never put into effect. 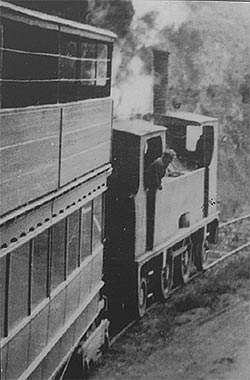 In 1929, the Paragon Omnibus Company began operating a thorough bus service between Blessington and the city centre, eliminating the requirement for passengers to transfer between the DBST and the Dublin tram at Terenure. This struck a fatal blow to the DBST.

Last-ditch efforts were made in 1931 to have the DBST taken over by either the Dublin United Tramway Company, or by the Great Southern Railways. This did not come to pass, and so  was, that on 31 December 1932, a wet Saturday night, the last trains ran on the DBST lines, the 6:15pm from Terenure to Blessington, and the 10:30pm from Terenure to Tallaght.

Many people were killed in the tram days, including many who were the worse for drink, who were knocked down by the tram which was known to appear suddenly and silently from around a turn in the road, or behind a hedge. In one case, a conductor was thrown to his death from the swaying trailer car. In Templeogue the bodies of the dead were taken to the local pub the Templeogue Inn. This occurred so often the pub became known as The morgue. There were so many crosses marking the sites of deaths, that the route of the tram became known as "the longest graveyard in Ireland". 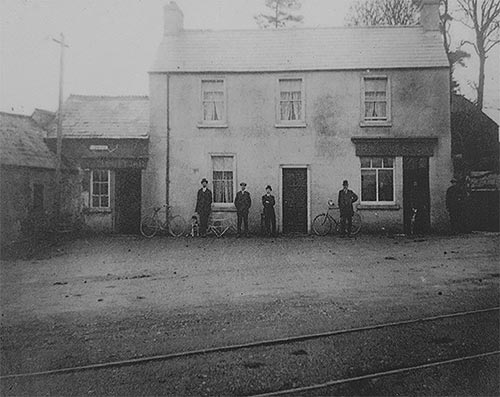 Dillon's Pub (formarily Brittas Inn Pub / now Blue Gardenia) in 1900's with tram line in foreground. The tram stop to Blessington was opposite the pub. 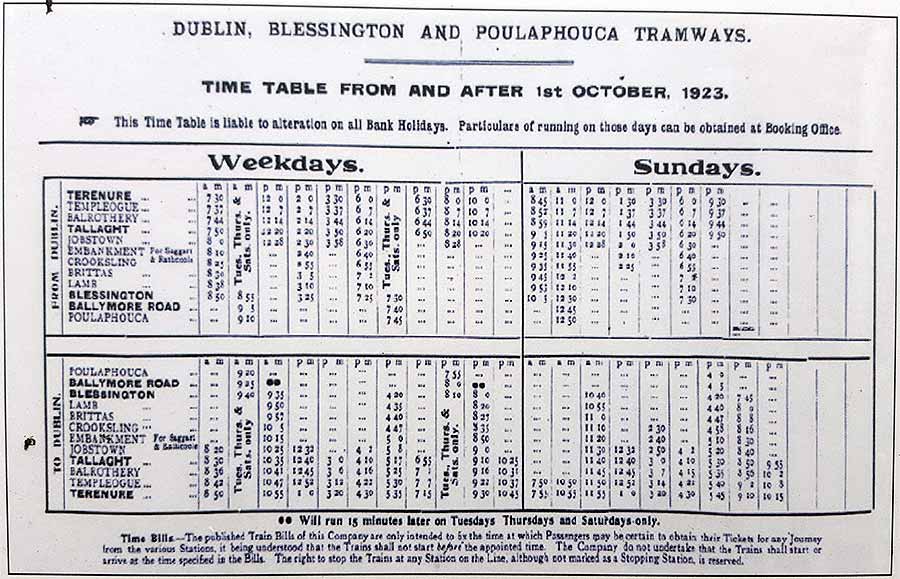 (A Dublin / Blessington tram timetable from 1923)

Welcome to our all new Brittas Community website which was launched in February 2018. We want to use this on-line location as a central place to share all the community news and inform you of any news, announcements or upcoming events.

We hope you like it and please feel free to give us any feedback or suggestions on ways to improve the site. We hope you drop by here often! 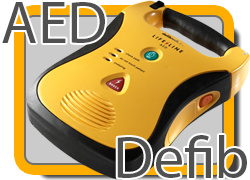 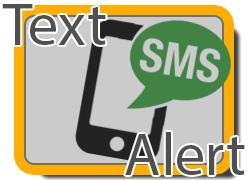 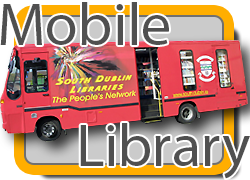 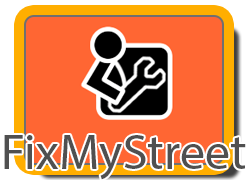